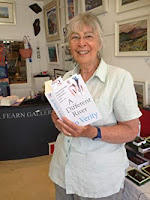 Today, I’m delighted to welcome author, Jo Verity, to the blog. Jo’s sixth novel, A was published by Honno on Thursday 28th June and I’m very honoured that she asked to be featured on the blog.

Jo, welcome. Please introduce yourself and tell us a little about your writing.
Hi everyone. Thanks, Jan, for inviting me onto your blog.
I’m Jo Verity and I write contemporary, non-genre fiction. (For what it’s worth,  Amazon tags my novels as Literature & Fiction > Contemporary Fiction > Family Life.) My characters are ‘ordinary people’ struggling with the ups and downs of the twenty-first century. Like all of us, they make good and bad choices. They succeed and they fail. But mainly they keep trying. In my novels, we spend time with people a bit like us, measuring ourselves against them as they muddle through. Hilary Mantel wrote in her introduction to the wonderful The Tortoise and the Hare by Elizabeth Jenkins. ‘Apart from a war, what could be more fascinating than a marriage?’ I might be tempted to swap ‘a marriage’ for ‘a family’ – but we’re on the same track. So, marriages, families, friendships, relationships – that’s the sort of thing that I write about.
When did you start writing?
It was March 1999. I’d arranged a rendezvous with an American friend whom I’d met in in 1992 when I was travelling. Ruth (a Jewish Zen Buddhist sculptress) and I kept in touch. I’d visited her in and she’d come to . We’d met a couple of times in . Ruth and I were going to spend a week together in . At the last minute, she pulled out (she wasn’t the most reliable) leaving me with a week’s leave and nothing much to do.
We’d just bought our first PC so it was the obvious time to learn my way around it, creating and saving documents, changing fonts and layouts, altering margins – that sort of thing. For some reason – I still don’t know why – I decided to write a story and use my flaky friend as its protagonist. This would do as my practice piece. Despite being an avid reader, I had never written anything. Within five days I was hooked. All I wanted was to write. It was thrilling finally and by accident to discover the thing I really wanted to do.
(That story – Think Like a Bee – took five months to finish. It was eventually published in 2006.)
What inspired you to write your latest novel?
I was mulling over ideas and I happened to re-read The Bridges of Maddison County. Who can resist Robert Waller’s tale of a chance meeting, instant chemistry and the soul searching this causes to its middle-aged lovers?
So I decided to write a love story. Not the juvenile, ‘moon and June’ kind, but something truthful, realistic and yet a little off-beat. A love story which I would like to read and which chimes with the complications of present-day life.
I really enjoyed ‘A ’.  It’s one of very few books I’ve read recently with an older protagonist. Was that a conscious decision on your part? 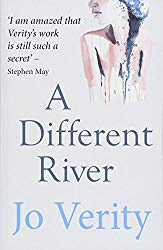 Yes. And my reason is partly answered by your question. When I was writing my first novel, Everything in the Garden, I was advised by a literary agent that ‘no one wants to read a story about anyone over the age of forty’. This horrified me. The notion that no one over forty does or says anything interesting is patently untrue. Maybe it’s easier to market such stories but that’s just lazy and makes for a very blinkered take on the world. Besides, sixty is the new forty, isn’t it?

It’s not uncommon these days for someone in middle age – usually a daughter, I have to say –  to find themselves the unwilling yet dutiful lynch-pin of a four generation family. As daughter, wife, mother and grandmother they are relied upon to support so many people in so many ways. In A Different River, sixty-one year-old, Miriam, is being pulled in all directions. She has lost confidence and self-esteem and is beginning to fear she’s fading into the wallpaper. Her reaction to her loss of self is at the heart of the novel.

Your characters are very convincing and there is a real depth to them. Can you say which came first, the characters or the story you wanted to tell?
The characters. Always the characters. For the first couple of years I wrote only short stories which, by their nature, tend to be character driven. When I plucked up the courage to embark on my first novel, I tackled it as if it were a very, very long short story. It seemed to work and having found a methodology which suits the kind of narrative I write, I’ve stuck with it. I take two or three characters, set them down in a challenging situation and see what they’ll make of it. If they get too complacent, I chuck a spanner in the works. Some kind of a plot will inevitably emerge but it won’t be the kind you can write on post-it notes and stick on a timeline. When I start a novel I have absolutely no idea how it will finish. That’s both scary and exhilarating.
Are any of the characters based on people you know?
If I’m to stand a chance of making my characters convincing to readers, I have to have total belief in them myself. They must think, speak and act exactly as they would in whatever I throw at them. I find the best way to do this is to plunder the traits and habits of people I’ve encountered, tweaking them enough to conceal my source. I have to know what my characters look like too because when I’m writing a scene I close my eyes and picture it as if I were watching a movie. I see Miriam as a cross between Emmylou Harris and Christine Lagarde, and Paul as the man in the catalogue for over-priced hiking equipment that arrives with the junk mail. Minor characters don’t have to be so precisely drawn – they can be more pencil sketch than oil painting. I can have a bit of fun with these. Exaggerate a little, make them larger than life.
As well as telling a compelling story, you have explored a number of serious issues in the book. Would you like to tell us why these are important to you?
This sounds daft but it’s only after I’ve finished the final draft of a book that I discover what its themes are. My aim is to tell an engaging and credible story. In the course of this, my characters encounter a range of problems. I’m often surprised and delighted by how they deal with things that their fictional lives chuck at them, what rattles them and what they shrug off. It might be said that A Different River raises questions about responsibility, loyalty, self-awareness, the unreliability of memory but I’d prefer readers to decide for themselves what its themes are.

It wasn’t until the end of the novel that I fully understood why it’s called D. How long did it take to come up with such a wonderfully apt title?
It seemed cold blooded to refer to work in progress as ‘Novel number 6’ so I had a couple of generic-type titles in mind but I was on the lookout for something more pertinent. As I wrote on, the story began taking unexpected turns. The way in which Miriam’s past, or rather her recollection of it, related to the present became the driving narrative thread. I recalled reading something that the Greek philosopher Heraclitus (apparently!) said: ‘No man steps twice into the same river, for it is not the same river and he is not the same man.’ Hence A Different River. 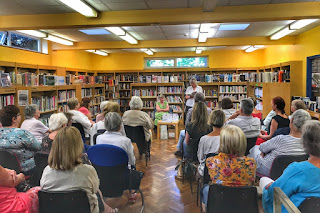 How much planning do you do for your novels?
I don’t plot in the conventional way but I do need to be sure that I’ve chosen my protagonist/s well and that they have the potential to generate a multifaceted story. I need to be clear in my own mind whose story I’m telling.
The structure of the book has a lot to do with how the reader gets to know the characters but it mustn’t get in the way of the story. If you’re going to employ tricky time shifts and changing points of view it must be done skilfully or you are going to irritate and confuse your reader. In my long fiction, I have stuck with third person, past tense, limited to one or two points of view. (One in Everything in the Garden, Not funny, Not Clever and A Different River; two in Bells, Sweets from and Left and Leaving.) When we were children, stories invariably began ‘once upon a time there was…’ Third person, past tense. Simple. Direct. Honest.
What are you currently working on?
It depends what you mean by working! I have two ideas and I haven’t yet decided which one to pursue. I’m making lists of pros and cons, possible characters, mentally meandering down various highways and byways, seeing which appeals, which has the most potential. I’m a slow writer. If I’m to spend years with my characters I want to be sure that, even if I don’t like them, I believe in them and understand what makes them tick. They must hold my attention.

You must view every novel differently as you progress along your writing journey. How does A  compare with your other novels?
It took longer to write, for one thing. Four years from start to publication! I made several false starts. It was perhaps six months before I was confident I was on the right track, striking the right tone. The more I write, the more critical I become of what I’ve written. This makes for slow progress but it’s consistent with the organic way my narratives develop.
My novels are standalone yet, with the publication of the sixth, it has dawned on me that, without realising it, I have been creating a patchwork quilt of story-lines, covering many of the facets of contemporary life.

What is the biggest compliment a reader could pay you after reading your book?
‘There’s a great deal of truth in what you’ve written.’ That’ll do for me.
Thank you so much, Jo, for taking time to chat to me. I wish you good luck with your book.

My thoughts after reading A Different River - 5 stars *****


I thoroughly enjoyed A Different River. The novel appealed on a number of fronts, not least because it’s one of very few books I’ve read recently with an older protagonist. The main character, Miriam, is sixty one years old and her role falls between being a dutiful daughter of elderly parents and a grandmother to her daughter’s young children. The book deals with her torn loyalties and unconventional decisions in her private life as she gains in confidence and her self-esteem is raised. The novel is beautifully written and the story of Miriam’s journey is a compelling one, keeping you turning the pages. The characters are multi-layered and authentic with traits and characteristics that we can recognise in people we know. An excellent, satisfying read! I look forward to reading more novels written by Jo.
A is published by Honno Press
You will find more about Jo and her latest book on:
Amazon UK
Amazon.com
Twitter: @jo_verity
Jo's FB Author page

**STOP PRESS: Since the interview, A Different River has been nominated for the 'Not the Booker' prize 2018. If you have read the book, you have until 11.59 p.m. this evening, Monday 6th August, to register your vote. Please click HERE. Good luck, Jo!

Thank you for reading. What are your thoughts about what Jo was told by an agent that 'no one wants to read a story about anyone over the age of forty’?