A Chat With Susanna Bavin

Today, I’m delighted to be chatting with saga author, Susanna Bavin. Her debut novel, The Deserter’s Daughter was published by Allison and Busby on June 22nd. Sue was an early follower of mine on Twitter. She’s always very supportive, re-tweeting and liking my tweets about writing and she never fails to leave a comment on my blog. Thank you, Sue! 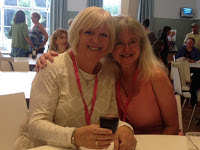 I was thrilled to eventually meet her in person at last year’s RNA Conference at . We met up again this year at in July where I was pleased to meet some of her other writing friends, too. In the year between those two meetings, a lot has happened in Susanna’s writing life but I’ll let her share those exciting events with you in the interview.

Sue, welcome. It's lovely to have you back on the blog and congratulations on the publication of your wonderful book.
Have you always considered yourself a saga writer and what attracts to the genre?
I was a saga writer before I knew what sagas were. As a teenager, I lapped up Victoria Holt's novels and started writing gothic stories, but these naturally grew and became what I later found out were sagas. For me, this was just the natural development of my writing style. I was delighted when, as a reader, I found out that other people wrote this kind of story too!

What do I like about sagas? The historical setting, for starters. I love to see the characters having to tackle their problems within the social and legal context of the time. I also enjoy the glimpse of social history, which is a great interest of mine. Clothes, meals, furniture - I love all those domestic details.

I believe you attracted a literary agent before The Deserter’s Daughter was published. Can you tell us about that and perhaps about the relationship you’ve established with her? 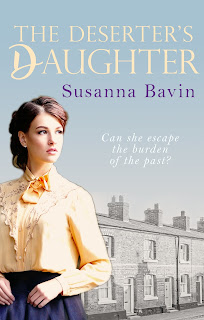 I submitted the third draft of The Deserter’s Daughter to several literary agents and although I was rejected by them all, I received positive and encouraging comments. After a few months, I wrote a fourth draft and could see right away that this was better than anything I had written previously. It gave me a real "now or never" feeling.

I made a list of agents to submit to, putting them in order of preference, and Laura Longrigg of MBA was at the top. I submitted to her and two others on a Friday afternoon, intending to do more submissions on the Saturday, but that never happened. Laura read my submission on her way home and emailed me at once to ask to see the full MS.

I'm glad you have asked about our relationship. We get along well on a purely personal level, which I think is enormously important. I trust her implicitly and if ever I had a problem with a book, she is the person I would turn to for suggestions and guidance.

How did you feel when you heard your story was going to be published by Allison and Busby?
I had an email from Laura, headed "some nice news" - nice?! I was thrilled. Actually, the best bit was my husband's reaction. His favourite author, Edward Marston, writes for Allison & Busby, so he thought it was marvellous.

Having both an agent and an editor with your publisher, would you tell us about both sets of editing you had to do before the novel was published?
When I met Laura for the first time, one of her questions was, "Why is The Deserter's Daughter so short?" Well, I had always been advised that you have to keep your book under 100,000 words. "It's a saga," she said. "It's at least 120,000 words."

That was a terrific moment - being given permission to expand the book and dig deeper into the characters. Laura was keen for me to explore the relationships further. And before you ask, the final word count was a little under 127,000.

The only edits that Lesley Crooks, my editor at Allison & Busby, asked for were two small surface-edits. One was to explain the difference between a pound and a guinea (which I worked into the narrative by way of Evadne's snobbery) and the other was to make it clear what date the baby was born.

A lovely position to be in, then - expanding your word count and only two small edits.
The Deserter’s Daughter deals with a number of social issues pertinent to the time in which the novel is set; your characters are very authentic and come alive on the page. Can you say which came first the characters or the story you wanted to tell?
The chicken and egg question! My initial unformed idea was to do with auctions and something being sold that shouldn't be sold. From that came the antiques shop and after that the characters and the plot arrived in my head pretty much all together. Although the plot and characters developed in the writing, the essentials of both were there from the beginning.

There is a very strong sense of place in the novel and I suspect it is an area you know very well. To get the atmosphere just right for the 1920s, how much research and delving into archives did you have to do?
The Deserter's Daughter is set in Chorlton-cum-Hardy in , where I, and several generations of my family, grew up. Many of the landmarks from 100 years ago are still there, so I constantly referred to old photos to ensure my descriptions were appropriate to the time.

I also used snippets of information gleaned from talking to elderly people. When Mrs English skins the rabbit and then takes the skin back to get her deposit off the butcher, that is something I was told about by a lovely lady called Dot. It's just a tiny detail, but it's the kind of thing that adds authentic colour.

Are you a planner or a pantser?
I started out as a pantser (don't we all?), but I always knew how the story was going to end, so it was just a matter of getting there. Later, I started doing mini-plans of the section of the book I was currently working on; and this technique has worked well for me, though I don't do it religiously.

When A&B wanted The Deserter's Daughter, they also asked to see a synopsis of another book, so for the first time ever I had to produce a full and detailed synopsis before writing a word. That was a challenge, but there's nothing quite like the prospect of a book deal to concentrate the mind! And yes, they did sign up book 2 on the strength of the synopsis.

On a more general note, do you have a particular routine when writing and where do you write?
Having spent the past six months writing the second novel for A&B to a deadline, I can honestly say my routine has been: get on with it! I also have a part-time day job, so I spent from January to the end of June working seven days a week. The writing was mostly done at home, though I did discover I adore writing on the train.

In easier circumstances, I like to take my writing out and about. The original version of the chase-through-the-fog scene in The Deserter's Daughter was written at seven o'clock one May morning, sitting on the rocks by the sea near the pier in Llandudno.

I believe you have completed the second novel for your publisher. Is it another saga set in the same era in ?
Yes and yes. A lot of people have already asked if it is a sequel to The Deserter's Daughter and no, it isn't. It is called A Respectable Woman and it is the story of a young woman in Lancashire who learns her husband has been leading a double life, so she leaves him and carves out a new life for herself and her small children in Manchester. The plot is full of twists and turns and there is a court case that I hope readers will find gripping. I have also done something I have never done before - I have used a child as a viewpoint character. Posy is a sparky little thing and I hope readers will love her as much as I do.

I’m sure they will, Sue. It sounds intriguing.
Thank you so much for taking time to chat to me. I hope that The Deserter’s Daughter will be a huge success and I wish you good luck with A Respectable Woman when it’s published in June next year, too.

It's been a pleasure chatting with you, Jan. Thank you for inviting me.

The Deserter’s Daughter is published by Allison and Busby www.allisonandbusby.com/

My thoughts on The Deserter’s Daughter:
5 stars *****
I love reading family sagas and eagerly awaited the arrival of The Deserter’s Daughter. I was not to be disappointed! Susanna’s story has all the ingredients to keep the reader gripped from beginning to end. It has everything to keep you turning the page – intrigue, characters to love and those that make you angry, crime, heartache and also love. It’s beautifully crafted, at times written with language using vivid imagery and always giving insight to the background and context of the characters. Living in 1920s in the shadow of the Great War, those characters are particularly well drawn and relationships between them are explored. I was especially fond of Carrie and full of admiration about how she dealt with whatever life threw at her. I have no hesitation in recommending this excellent debut novel and look forward to many more by this author.


Thank you for reading our chat. I hope you enjoyed finding out more about Sue's newly published novel. Are you a lover of sagas? If so, perhaps you'd like to share with us what it is about the genre that appeals to you? Thank you.
You may also follow me on Twitter @JanBayLit and on my Jan Baynham Writer Facebook page.
Posted by Jan Baynham at 00:17 24 comments: