When I started writing fiction a couple of years ago, one of the things I had to learn quite quickly was how to handle dialogue. It is through dialogue that our characters come to life and we can show through their words a lot of information about them without telling the reader. I found that one way to hear dialogue is to eaves-drop on conversations...on a bus, in a queue to pay in a supermarket, in fact, anywhere where people are interacting by talking. I immediately start making assumptions about the people who are talking and about the situation that they're talking about. Later, I often start to think up stories about what I've heard. I noticed that very often the dialogue I overheard contained short sentences, part sentences and if I've written perfectly constructed complex sentences as dialogue, they will appear 'clunky' and unnatural. One member of my writing group writes dialogue particularly well and reveals so much information about his characters simply through what they say.

Where your story is set can be implied by the words used. My daughter moved to Manchester after many years living in Hertford. Now, when she's offered a cup of tea, she's noticed people say, 'Fancy a brew?' In a recent story, one of my older characters said to his young colleague, ‘You, ok, now, Nia, bach?' Even though a reader may not know what 'bach' means (little one), hopefully they would gather that it's a term of endearment in Wales where as if I'd used 'duck', 'pet', 'honey', 'princess', these would suggest other regional settings.

After years of encouraging pupils to use a variety of synonyms for 'said', I was soon taught that these give your story an amateurish look. It's best to stick to 'said' as the only dialogue tag and even then, it should not to be accompanied by an adverb. The words spoken should be the important ones to read and 'said' retreats into the background and almost becomes like a punctuation mark. As long as the reader knows who's speaking, we don't need a dialogue tag at all. A character's actions and mannerisms at the time of speaking can show the reader how the words were said and how the character was feeling.

There is an excellent section on dialogue in Telling Tales: How to Write Sensational Short Stories, a book based on the first writing course I took which was taught by Lynne Barrett-Lee. In it, she says that writing good dialogue:


Have you written any stories after overhearing a conversation? Have any of you written a story completely in dialogue?

My story 'Monty The Tabby Tom Cat' - inspired by a real life, Monty, belonging to my son and daughter-in-law, Jon and Rebecca, - appears in 'The Cat Who Chose Us and other Cat Stories' and is available at Amazon.
http://www.amazon.co.uk/The-Cat-Chose-other-Stories/dp/1326012940
All proceeds to Cats Protection.
Posted by Jan Baynham at 07:30 12 comments:

I ended 2014 by succumbing to the horrible sore throat and coughing bug that seems to be doing the rounds. I did feel well enough to make the first meeting of the New Year with my writing group yesterday and knew it was time to get back to my writing. So, here goes...

I need to set myself some goals. I think, I procrastinate, I dilly-dally and dither so.........in 2014 I must WRITE,WRITE, WRITE! Here are the goals I've set myself:

I look forward to sharing my progress with you. Any advice gratefully received!

How did I do? Which of those goals were achieved?
Stats - 51 posts with 317 comments, 9663 page views which included 4612 from the USA, 3828 from UK followed by page views in China, Germany, Ukraine, Russia, Romania and Poland. The post with the most views was the Woman's Weekly Workshop one.
I'm sure the fact that after each new post, I put a link to my blog on my Jan Baynham Writer Facebook page as well as tweet on @JanBayLit has widened the readership.
...In With The New

Here are my goals for the New Year: 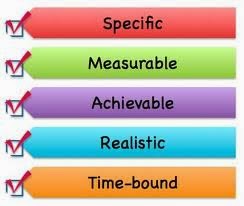 I hope they are SMART targets for me.
Do you think they are specific enough?
How I be able to measure my success?
Are they achievable for the stage I'm at on my writing journey?
Realistic for me?
Is a year too vague? Would it be better to break the year down into smaller chunks of time?

Thank you for reading my blog and all good wishes for a very productive year in 2015! HAPPY WRITING!