This week I am delighted to welcome back my very good writer friend, Sandra Mackness, who writes as Jill Barry. Sandra is multi-published in the romance genre with over twenty novels, but her new novel is a psychological thriller entitled ‘The House Sitter’ and was published on December 5th by Headline Accent.

Welcome to the blog again, Sandra.
It’s great to be back, Jan. Many thanks for inviting me.

Wow, a new genre, a new publisher. What was the inspiration for the novel?

A very good friend of mine who lived nearby decided to put her house on the market. I realised I would miss her very much, and for some reason, maybe my weird writer’s mind, Ruth, the house-sitter character began to take shape. The remote mid-Wales village where I once lived offered the perfect setting for The Sugar House, in which Eddie and Suzanne live.
The character of Ruth is very different from your usual characters and she’s essential to making this a much darker tale than we’re used to from Jill Barry. What did you enjoy about creating 'a delightfully horrid villain', as one reader described?
Ruth has an interesting back story and is both a loyal friend and an unpleasant enemy. Without giving any spoilers, it was fascinating to describe her evil tricks and how she uses her caring image to fool people into believing she's sincere in wanting to help her friends to move away if they wish.

How did you get into her head and her way of thinking?
It helped to have once lived in a remote community. Once Ruth’s obsession became clear, her devious actions followed.

The novel is set in mid-Wales, an area that you and I know very well. How important is the setting to the story?
My fictitious village is one which some people fall in love with, while its remoteness terrifies others. The forests and the nearby ranges controlled by the Army, would appeal only to a certain type of house buyer. And I, like Ruth, have looked out of my window to see the horizontal rain sweeping across the landscape…

In the past, you’ve been complimented on creating authentic well-rounded characters. Which came first in ‘The House Sitter’, the characters or the story itself?
The story presented itself first. This is interesting, as it now occurs to me this never happens in my romantic fiction where I always begin with ‘a heroine’ in mind.

Are Suzanne and Eddie based on real people?
Great question! Hand on heart, they are not. But I think they’re an amalgam of people I’ve met over the years.

How much plotting did you do before starting to write the novel?
Not a great deal. But as the different situations cropped up, it was important to make them credible and there is a device I used which made Ruth even more fascinating to write.

Will there be a sequel?
I’ve been asked this question before! Some people say the novel’s ending begs for one. I did start on a sequel but other projects caused me to put it aside. We will see.

What would be the best comment a reader could make about your new novel?
Probably that they couldn’t put it down.

There are a number of issues explored in the story. What questions do you think would make for a good discussion at a Book Group meeting?


Thank you so much for taking time to chat to me, Sandra. I wish you good luck and lots of sales with ‘The House Sitter’.
‘The House Sitter’ is published by Headline Accent @AccentPress
Please use the following link to see all Jill’s books available on Amazon: https://www.amazon.co.uk/Jill-Barry/e/B00FE0GQJ0%3Fref=dbs_a_mng_rwt_scns_share
Email: slmackness1@gmail.com
Blog and website: www.jillbarry.com
FB Author page: www.facebook.com/JillBarryBooks/
Twitter: @barry_jill

About the book
When Suzanne and Eddie decide to put their house on the market and move closer to their daughter, they neglect to tell their friend and house sitter Ruth. When Ruth finds a ‘For ’ sign perched outside their house, she’s outraged, having never imagined they would leave. What follows is a series of events that are set to ruin the couple’s plans – with dramatic and shocking consequences that no one could have predicted …

Quote from Sally Spedding, crime author: 'A powerful, psychological chiller to keep you turning the pages, but keep a light switched on!'

I hope you enjoyed hearing about the new Jill Barry novel. As a reader, do you like to read a variety of genres? As a writer, have you switched genres? Do you have a favourite genre that you return to?

Thank you for reading. You may also follow me on Twitter @JanBayLit and on my Jan Baynham Writer Facebook page.
Posted by Jan Baynham at 00:05 8 comments: 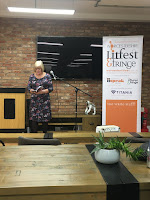 Last night, I travelled to Worcester for the launch of the annual WorcestershireLitFest & Fringe anthology of flash fiction. I've been going every year since I first entered the competition in 2014 and read out my work to an audience for the first time. This year, three of my flashes appear in the anthology, one 'The Girl in the Looking Glass' had been placed 2nd and another, 'Dark Smoky Eyes' was shortlisted. It always amazes me when I start reading the flashes how varied they are in subject matter and writing style. Some are funny, some are sad, some quirky or obscure and others have a twist you didn't see coming. But they all tell a story in 300 words or fewer.


I've written about flash fiction on the blog before. The brevity of the pieces means you can write them in between longer stories and novels or when you're editing and missing the creative thrill of writing something new. Every word counts and the tight word count is perhaps a very good discipline for a waffler like me. This week, our local Chapter is holding its annual Christmas lunch at Cote Brasserie in Cardiff. Continuing with an idea we started last year, we have been given a picture prompt, selected by Sue McDonagh, for a flash fiction piece of no longer than 300 words to share after the meal. Does the image spark any ideas for you?

If you are a member of the RNA, a writing competition has just been announced. Romance Matters is launching a flash fiction competition. It's free to enter, max word count of 250 words on the theme of New Beginnings. The winner will be published in the next edition of the magazine. Deadline 13th December. You should email them to ellamatthewsauthor@gmail.com. GOOD LUCK!

Thank you for reading. Do you enjoy reading or writing flash fiction? I'd love to hear why if you do. You may also follow me on @JanBayLit and on my Jan Baynham Writer Facebook page.
Posted by Jan Baynham at 09:24 2 comments: