Today, I’m delighted to be chatting to author, Judith Barrow. Those of you who read my blog regularly will know that I’m a big fan of Judith’s first two novels set during and just after WW2, 'Patterns of Shadows' and 'Changing Patterns'. I referred to them in my post on 19th July last year when I was discussing how authors undertake research for their writing. I’m thrilled to say that today,15th July, is the eagerly awaited publication day for Judith’s third book in the Patterns trilogy, 'Living in the Shadows'.

Judith, welcome. Please introduce yourself and tell us a little about your novels.
Hi, I’m Judith Barrow, born and bred in a place called Saddleworth, a group of villages on the edge of the Pennines in . I moved to Pembrokeshire in 1979 with my husband and three small children into a half-built house in a field. That’s a whole other story. I tutor creative writing for adults under the Lifetime Learning Scheme for Pembrokeshire County Council and hold private creative writing workshops. I write family sagas which sometimes dither over into other genres.
Can you tell us what inspired you to write the first novel?
'Pattern of Shadows' was inspired by my research into a disused cotton mill in Oldham, a town in Lancashire in the North of England, and its history of being the first German POW camp in the country.  I was looking for information in the Local Studies and Archives for general background for a story I was writing. The history of Glen Mill brought back a personal memory of my childhood and I was side-tracked.

So, had you visited Glen Mill when you were young girl then, Judith?
Yes, my mother was a winder (working on a machine that transferred the cotton off large cones onto small reels (bobbins), for the weavers). Well before the days of Health and Safety I would go to wait for her to finish work on my way home from school. I remember the muffled boom of noise as I walked across the yard and the sudden clatter of so many different machines as I stepped through a small door cut into great wooden gates. I remember the rumble of the wheels as I watched men pushing great skips filled with cones alongside the winding frames, or manoeuvring trolleys carrying rolls of material. I remember the women singing and shouting above the noise, of them whistling for more bobbins: the colours of the cotton and cloth - so bright and intricate. But above all I remember the smell: of oil, grease - and in the storage area - the lovely smell of the new material stored in bales and the feel of the cloth against my legs when I sat on them, reading until the siren sounded, announcing the end of the shift.

You've certainly transported us back to that time with such vivid memories.
When I thought of Glen Mill as a German POW camp I wondered what kind of signal would have been used to separate parts of the day for all those men imprisoned there. I realised how different their days must have been from my memories of a mill. There would be no machinery as such, only vehicles coming and going; the sounds would be of men, only men, with a language and dialect so different from the mixture of voices I remembered. I imagined the subdued anger and resignation. The whole situation would be so different, no riot of colour, just an overall drabness. And I realised how different the smells would be - no tang of oil, grease, cotton fibres; all gone - replaced by the reek of 'living' smells.

I knew I wanted to write about that. But I also wanted there to be hope somewhere. I wanted to imagine that something good could have come out of the situation the men were in.

Perhaps, you’d like to tell us how you got that book published.

I was taken on by an agent the day before 'Pattern of Shadows' was accepted by Honno Press. Honno was gracious when I told them I was going with the agent. Long story short, she sent it to a commercial editor. When it came back, it wasn’t my book; it was more of a chick-lit. Nothing against that genre but it’s not what I write. The agent wanted me to keep it like that – I didn’t – we parted company. Meanwhile another agent want to take me on but I decided I’d be happier with Honno so, cap in hand, I went back to them . Luckily they liked the book enough to give me a second chance. I’m more than happy being part of a wonderful group of women authors.

When you embarked on 'Pattern of Shadows', did you envisage that it would be the first of what we now know to be a trilogy?
No, not at all. But then I found out that the Howarth family wouldn’t leave me alone.

When did it occur to you that there was a further story to tell?
When I reached the end of 'Pattern of Shadows'; I realised that there was so much more to tell.

Does that mean we follow the same characters in each of the three books?
Yes, along with the next generation.
Your characters are very real and you explore the whole gamut of human emotions in the books. Can you say which came first the characters or the story you wanted to tell?
The story. But the characters soon made themselves known. And what a lot they are!

That leads me on to the next question, how much planning did you do for each of your novels?
I have a general idea what I’m going to do. But then the characters chime in and say what they will and won’t so. Sometimes that’s very frustrating.
On a more general note, do you have a particular writing routine when writing?
Yes, I start writing about five in the morning and try to get three hours in before I even look at any social media. But sometimes curiosity gets the better of me with that; I do like to see what everybody else is doing. Then, if I’m on a roll I keep going until domestic trivia (which I do grudgingly – hah!) or my classes (which I love!) drag me away from my PC. I also try to get a hour in in the evening.

5 a.m. Wow! Do you have a special place where you write?
I’m lucky enough to have my own study; one end of the room is for my writing desk and teaching files etc. and the other is set out for my painting – which I don’t do enough of, I’m afraid.

What is the biggest compliment a reader could pay you after reading one of your novels?
Giving it a review.

What are you currently working on?
Two  books actually:
'Foreshadowing', which will be the prequel to the trilogy and which is the story of Bill and Winifred Howarth, the couple that started the whole shebang!

And, 'The Memory' – a novel I’ve been working on for a while. It’s the story of a woman looking after her mother who has Alzheimers – but has another story running parallel to it.

Oh, and then there’s my children’s book that I keep going back to (middle-grade) I’ve been told there are too many characters in it and the trouble is I can’t decide who should go.
You must be very excited about the launch of ‘Living in the Shadows’ today. How will you be celebrating?
Oh I am. It was such a thrill when I actually held a copy of it in my hand. I won’t have much time for celebrating though ; I have a lot of events in front of me over the next few months. But I will be having a glass of wine … or two! 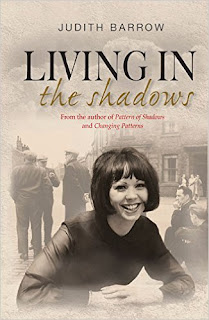 Thank you so much for taking time out of such a busy week to chat to me, Judith. I wish you good luck with the new book.

‘Living in the Shadows’ is published by Honno Press http://www.honno.c.uk/

Details about Judith and her books may be found on: