Sssh! Do You Want To Know A Secret?

Recently, I watched the aptly titled drama, The Secret, on ITV. Set amid a devout Baptist community in Northern Ireland in the early Nineties, the story is based on a true story about an adulterous affair that went horribly wrong. Rather than reveal the outcomes in case some of you want to watch the series, HERE is a link to find out more.

My first novel centres around one big family secret. Everyone has managed to keep it from my main character, Clara, for eighteen years until she overhears her aunt spilling the beans to someone at her nephew's christening. Her reaction to what she has found out takes her to another decade in history and to a foreign country. There are other secrets of forbidden love and Black Market in the story, too. 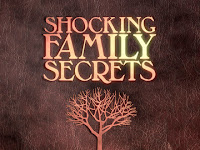 I'm now planning novel number two and there's a secret at the heart of my new story. It's got me thinking about what kinds of secrets lie deeply buried in families.Some can be small and insignificant whilst others can have heartbreaking results when they are divulged. Most families have secrets but it's the kind and importance of those secrets that vary. Some of the best novels I've read centre around deeply held secrets. The secret can relate to issues such as infidelity, mental illness, crime, abuse, premarital pregnancy, sexuality, alcoholism...the list goes on. It seems that the darker the secret the deeper it's hidden. Any topic that a family member thinks may cause anxiety may become a family secret. Secrets that were shocking in one era may be perfectly acceptable in another.


At a recent meeting of my critique group, I took along the mind-map/plan of novel number 2 which is another dual narrative and partly set in Greece. I presented the initial plot and asked for suggestions for other possible family secrets that would be unravelled by the main character, Lexi, in her quest for the truth about her birth father. Here are some of the what if?s my writing buddies came up with:
It was interesting to see how people came up with different scenarios and by relating their 'stories', it gave me plenty to think about. I won't tell you what I've decided or even if I'll use any of their suggestions......it's a secret!

What secrets do you find the most fascinating or compelling to read about? What book that has a dark secret at its heart would you recommend?

Look out for The Unravelling by Thorne Moore which is due to be published on July 21st by Honno. Isn't that a brilliant title? I can't wait to read it.

'Middle-aged Karen is suddenly reminded of an incident from her childhood and just as suddenly finding Serena Whinn becomes an obsession. As she tracks down her playmates from Marsh Green Junior School. Karen finds herself on a journey into a land of secrets and lies.' 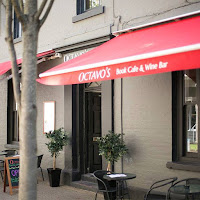 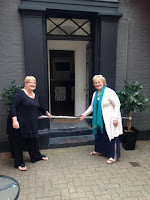 On Saturday I attended the official opening and launch of Octavo's Book Cafe and Wine Bar in Cardiff Bay. Independent publisher, Accent Press has opened the book cafe on the ground floor of an old Victorian hotel on West Bute Street where Accent Press's new self-publishing company, Octavo, is located. I arrived in good time to see best selling author, Katie Fforde to do the honours and cut the ribbon. 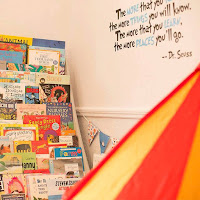 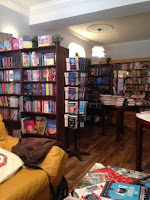 The occasion was well attended and the buzz seemed to last all day. Chatting to writer friends, we were all in agreement that the cafe would be an ideal meeting place where we'd be surrounded by books. Some of the walls were covered in 'book' wallpaper and displayed literary quotations such as 'Reading is to the mind what exercise is to the body.' The book shop is well stocked with a wide range of genres including plenty of titles for the younger readers. 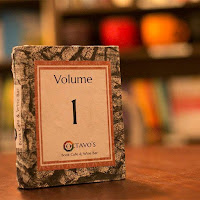 Hazel Cushion, founder and managing director of Accent Press, has said she was inspired to create a place where people can 'relax, browse and shop' that offers 'good food, coffee, wine and books.' From what I saw on Saturday, it certainly does that. The coffee was excellent and the food delicious. Once we'd ordered at the bar, even the table numbers came in the form of 'books'! 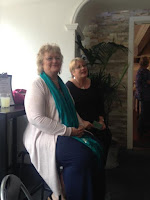 The book shop will promote and sell Accent Press authors' work and it was good to meet some of these writers on Saturday. There will be writing workshops and book groups as well as attracting new custom for the Octavo publishing service. It is intended to host a range of  events including 'writer-in-residence' days.

Before she left, Katie held an interesting and informative Question and Answer session where she was asked about her prolific writing career.

I would definitely recommend a visit to Octavo's Book shop. Do you have something similar where you live? Where do you meet up with writer friends?

Thank you for reading. You may also follow me on Twitter @Jan BayLit and on my Jan Baynham Writer Facebook page.
Posted by Jan Baynham at 09:04 9 comments: