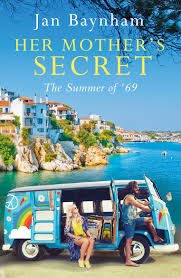 On Wednesday 21st April, it will be one year since I became a published author. My debut novel, Her Mother's Secret, is set in rural mid-Wales and a fictional island off the Peloponnese in 1969 and 1991. Exploring a mother-daughter relationship, it tells of secrets, loss, forbidden love, and a summer spent searching for true identity. The novel was published during lockdown and publication day had to be spent in my garden enjoying a Greek meal cooked by my husband instead of going out and celebrating with friends. This time last year, I was getting both excited and nervous about my first ever novel going out into the world. How would it be received? What if everyone hated it?

A year on, how did my story do? After a sleepless pre-publication night, I was blown away by the 5* and 4* reviews on the day itself on both Amazon and Goodreads. Over the last year, I have been humbled by the ratings and reviews that have continued to come in along with many messages from readers saying how much they have enjoyed Elin and Alexandra's stories. Thank you to everyone who has taken the time to do that. Many have commented how they enjoyed being whisked away to Greece to experience its weather, culture, and food at a time when we were all restricted and unable to go very far from our own homes. 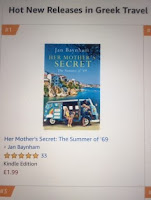 For a while, Her Mother's Secret even sported an orange bestseller flag with the top spot in the Hot New Releases in Greek Travel which was very exciting. In May, it came out as an audio version and it was lovely to receive a message from a partially sighted reader to say how much hearing the story read by Deryn Edwards for Audible.co.uk meant to her.

If you haven't read the novel, it is currently on offer, reduced to 99p, and I'd love it if you'd like to download it in celebration of its first birthday.

Here are some photos and snippets from the book to hopefully whet your appetite: 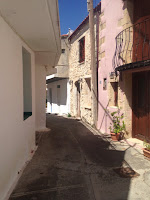 'A worn path shone through mottled grey flagstones and led from the water's edge up to the old town of Santa Marina. It told of thousands of tourists and travellers who had disembarked before her...This was it. The start of her adventure.' 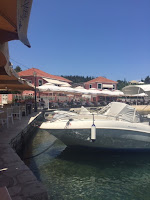 Elin sketched several scenes of the harbour. None of the yachts was as grand as The Palinourus but then perhaps they weren't owned by drug dealers, she thought. She started to move along the quayside when she heard an English voice.' 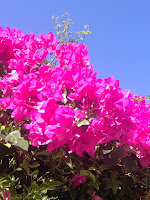 'Papery magenta bougainvillea hung in vibrant clouds... Yiannis led me to a door at the far end of the crazy-paved area. The pale blue paint was peeling and a small window to the right of it was obscured with grime and cobwebs.' 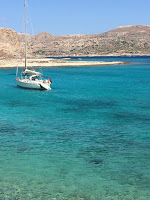 I loved writing Her Mother's Secret and creating Elin and Alexandra's stories. It took me back to the many holidays we've enjoyed in Greece and the wonderful local characters we've met over the years. It was June 2019 when we last holidayed there on the beautiful island of Kefalonia and it doesn't look as if we'll be able to visit again this year because of COVID.

If you do download the novel, I'd love to know how you enjoyed being transported to the sunshine and colours of my fictional Greek island. Thank you.