Skeleton in the Cupboard 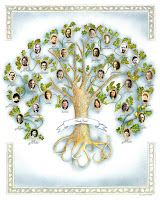 I have always been fascinated by the dynamics of families and the relationships between family members. Perhaps this is why I love reading sagas and try to write them myself. The way family members act and react towards one another is fascinating - often surprising and sometimes shocking! Is it nature or nurture that makes a person behave in a certain way?  Can you inherit someone's personality and temperament in the same way as you do their physical characteristics? Are those personality traits embedded from birth or can they change in a different environment?
Many novels, not necessarily only sagas, involve a secret - 'a skeleton in the cupboard' -   that is never discussed and is hidden away for generations. The big reveal is often the crux of the story and is what makes the reader keep turning the pages. For some years, I subscribed to 'Your Family Tree', a family history magazine. In each publication, the back page feature was always devoted to a 'Skeleton in the Cupboard!' Readers were invited to send in an article of 700 words telling of a secret in their own families. They ranged from keeping mistresses and adultery, bigamy, murder, imprisonment, debt, sexual and physical abuse. The list was endless. In the past, secrets about illegitimacy, disability and insanity were all considered to bring shame on the family and family members who were disabled or suffering from mental illness would be hidden away. Fictional accounts of similar family situations find their way into many of our stories.
Here are a few novels I've thoroughly enjoyed reading that have secrets at their heart:

'A Time for Silence' by Thorne Moore.
Publisher: Honno Welsh Women's Press
ISBN -13: 978-1906784454
The main character, Sarah, stumbles across her grandparents' ruined farm and begins to delve into her family history. She learns that her grandfather had been murdered but no one had told her. She determines to find out what happened but perhaps there are some family secrets that should never be revealed.

'A Simple Life'  by Rosie Thomas
Publisher: Harper Collins (now an e-book)
ASIN: B00HPN3K4I
The main character, Dinah Shepherd, has a shameful secret that has haunted her for fifteen years. She has a comfortable family life with her two sons but a choice she and her husband made all those years before is never referred to. She finally decides to confront the truth and risks everything to claim what is rightfully hers.

'The Kashmir Shawl' by Rosie Thomas
Publisher: Harper Collins
ISBN: 978-0007285976
When Mair Ellis clears out her father's house, she finds an antique shawl with a lock of child's hair wrapped up in its folds. Tracing her family history back to a time spent in Kashmir where her grandparents were missionaries, Mair uncovers a story of doomed love and great sacrifice.

'The Hand That First Held Mine' by Maggie O'Farrell
Publisher: Tinder Press
ISBN: 978-0755308460
A dual narrative, the story tells of Lexi Sinclair carving a new life for herself in London, at the heart of the 1950s art scene. In the parallel story, fifty years later, Ted is disturbed to realise that memories of his childhood do not tally with his parents' version of events. His search for answers lead to uncovering a secret that had been hidden from him.


In my own novels, secrets play an important part, too. In 'A Mother's Secret', details about forbidden love, illegitimacy and imprisonment for Black Market dealing are kept well hidden from the younger generations of the family. In novel two, 'Whispering Olive Trees', secrets about a young woman's time spent in Greece involving a love affair, murder and drug dealing only come to light after her death when she bequeaths her diary to her daughter.

What novel involving a family secret or 'skeleton in the cupboard' have you read and enjoyed? I'd love to hear your recommendations. Thank you.

A Hundred Years On 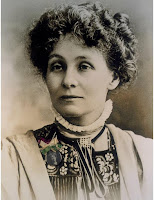 Yesterday was the centenary of the Representation of the People Act that was passed on February 6th 1918. It gave women aged over thirty and 'of property' the right to vote for the first time. There is still a long way to go but it was very important to mark the momentous occasion and remember the women who fought so hard to achieve partial suffrage for women. The Act paved the way the Equal Franchise Act a decade later and this gave all women over twenty one the right to vote - property owners or not.

Back in 2013, when I’d just started writing fiction, a new magazine, 'Pretty Nostalgic', invited writers to choose a character from history they admired and with whom they'd have liked to have afternoon tea. I chose Emmeline Pankhurst and I'm pleased to say the piece was published. Before I could write 'Taking Tea with Emmeline Pankhurst', I researched how she'd been taken to her first suffrage meetings at the age of eight by her mother and how that had influenced her to do the same with her own daughters. I read the harrowing details of the ways the suffragettes had been treated  - the imprisonment, the hunger strikes and the force- feeding. Because of their sacrifices women like me could cast their vote in the ballot box.

The White Camelia by Juliet Greenwood.


Published by Honno
ISBN: 9781909983502
The novel, set in Cornwall and London, gives a wonderful insight into the time before World War I when women had the courage to seek economic independence and the right to vote. Finding herself in London, Bea stumbles upon the White Camellia tearoom and finds it to be a gathering place for the suffrage movement. For Bea, it is life-changing as she is swept up in the struggle. Through her story, we learn of the treatment handed out to the protesting suffragettes. It is beautifully crafted and stayed with me for a long time after I finished reading it.

A Hundred Tiny Threads by Judith Barrow
Published by Honno
ISBN: 9781909983687
The novel's main character is Winifred Duffy who in 1911 leads a very sheltered life and is dominated by her uncaring mother. When independent Honora O'Reilly enters her life and talks of a better life, Winifred is persuaded to join the suffragette movement. She becomes an active member and is swept along by the fight for women's rights. As readers, we are witnesses to the bravery of the movement  and the violence meted out to those involved. A superb novel with memorable charcters. For my interview with Judith about 'A Hundred Tiny Threads' and my full review of the book please click HERE.