To Write a Prologue or Not
When I first started novel writing, I remember being told that prologues are not popular with editors and publishing industry professionals and yet some of my favourite authors have started their novels with prologues.
Here are a two definitions of a prologue:
- a preliminary discourse; a preface or introductory part of a poem or novel (www.dictionary.com)
- a literary device that functions much like an 'amuse bouche' - it arouses the reader's interest and provides a hint of what's to come (www.masterclass.com)

Prologues are a bit like marmite, I suppose; you either love them or loathe them. The main thing I've found when reading opinions about a prologue is to make sure it:
- is not too long (Readers often report skipping the prologues to get to Chapter 1!)
- does not act as an info-dump
- doesn't only create atmosphere without having much to do with the story.

A good prologue, however, may:
- foreshadow events to come
- provide background information to the central plot and its conflict
- establish a point of view. This may be the central character's or another character who is witness to the event
- set the tone of the story.

A decision has to be made whether you need a prologue or can go straight to Chapter 1. These are some questions you may have to ask yourself:
-  What information is provided in the prologue? Can it be revealed in smaller amounts later on and have the same impact?
- Does this character's POV come up again? Perhaps it would work better as a first chapter instead?

At the moment my novels all start with a very short cameo scene unrelated to the opening of the novel. I'm happy with the one in 'Whispering Olive Trees' which opens with Sophia Simonides finding a body on the beach near her home. I felt it was important to write a short piece from her POV as, although she is an important character, the rest of the novel is written from Elin and Lexi's viewpoints. When editing 'A Secret Daughter', though, I could see that the prologue wasn't working. I was able, with a few adjustments, to add that scene to another chapter. I have now written a very short prologue to replace it. A crucial character in the novel is Joe Jenkins, but this will be the only occasion where a scene is written from his point of view. We see his reaction at receiving a telegram which will be a vital part of the story later in the novel. I hope it works and at the moment it is staying!
So what am I trying to do here? I suppose that I have given readers a hook, hopefully to intrigue them. I hope that questions will be raised in the readers' minds and they will want to read on to have them answered.

I know this is the effect that prologues have on me as a reader. I feel satisfied when the questions raised in the prologue are answered as I read the book. Last night, I finished an excellent psychological thriller by Linda Huber, 'The Cold, Cold Sea'. The prologue here was disturbing as I read it and played an important part in the story. The novel was a real page turner and I read it in a matter of days. I highly recommend the book.

As a writer, do you include a prologue? Perhaps an editor has suggested that the prologue is not necessary and your novel would be better starting at Chapter 1. As a reader, what do you think of prologues?

Thank you for reading. I'd love it if you left a comment telling us what you think.

You may also follow me on Twitter @JanBayLit and on my Jan Baynham Writer page.
Posted by Jan Baynham at 09:50 18 comments:

A Writing Workshop for the Chapter and a bit of News

It was the first of May and a first for Sandra Mackness and me since we took over the running of the RNA South and West Wales Chapter. Author Jenny Kane joined ten of us to deliver an excellent writing workshop on our chosen topic of 'Developing Characters in Fiction'. She is one half of the Imagine Creative Writing she runs with her good friend, Alison Knight.

We were fortunate again to be able to use a training room at John Lewis Department store. Thank you to one of our Chapter members, Stacey, for arranging that. 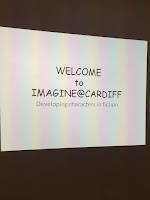 All characters are unique and rounded individuals. If we want to create believable characters, they have to be ones to whom readers can relate and connect. They need to be intriguing and flawed. Everyone has flaws but it's how they choose to deal with them that determines their character. It was Oscar Wilde who said, 'Beauty catches the attention but character catches the heart.' This is so true of people once you get to know them better, isn't it?

Other aspects of our characters to consider included:
- their hopes and dreams
- how appealing are they, not just their appearance
- their physical features: height, weight, colouring. Jenny advised keeping continuity notes, here.
- style
- mannerisms, gestures, tics, catchphrases
- how they walk and talk, accent
- where they live and work, study, daily routine
- their friends, relatives, contacts, relationships
- personality: are they friendly, open, mean hostile? 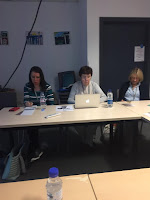 Jenny interspersed the workshop with useful activities. One that particularly inspired me, and I know I will use when editing and layering the character of Joe in my second novel, was entitled 'Who Do You Know?' We had to pick one character and pick 6 words that best describe that person, narrowing the list down further to two words. We then had to 'show' that trait rather than use the word directly. One adjective for Joe was 'shy'. I tried to show that by writing 'He was always be found in a corner where he could stay outside the circle of friends. Watching.' 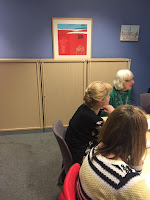 As we listened to all the points Jenny made, it was good to reflect on characters in our own writing as well as characters in books that have had an effect on us. Everyone's opinion will be different and characters have more that one side to them. We find inspiration for our characters all around us. People, past and present. Influential figures in history, your own ancestors, people who have influenced you in the past, teachers, doctors, bullies. In 'Whispering Olive Trees', Iannis who has his own wood turning workshop was directly inspired by a wood turner of the same name, working on a lathe in beautiful olive wood and making wooden fruit bowls and honey twizzlers you will read about in the book. We visited his workshop on our first ever visit to Crete and I hope I've captured the subtle colours and the smell of the curls of olive wood as a bowl is turned into shape on the lathe.

Another useful exercise was to think of an occupation your character wants and to choose three positive traits the character has regards suitability for thew occupation and three negative characteristics. When writing scenes in my third novel, this is what I did for Annie who desperately wants to become a stable girl, a groom for Mr Edmund's chestnut mare.

3 things in her favour:

3 things she wouldn't want her interviewer to know about her: 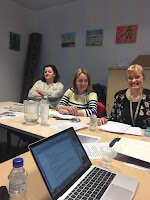 We also looked at how expressing emotions has changed with the passage of time. Fifty years ago, it was not seemly to show emotion perhaps. Characters, especially male characters, had to display a stiff upper lip. Even today some people cannot cope with other people's emotions. We talked about the choice of names and what they tell us about the characters. When teaching, I taught a Chardonnay, a Mercedes and a Porche. How different from the child with the same pronunciation as the last name, but she was a Portia, spelled the Shakespearean way! I'm sure you can envisage how the schools' catchment areas differed.

The three hours flew by as we looked at so many ways of creating unique, memorable characters. This is just a taste of what Jenny covered with us. In our Chapter, we are all at very different stages on our writing journey but we all came away enthused to get back to our characters. Thank you, Jenny!

Thank you for reading. What writing workshop have you attended with your RNA Chapter? How did it help you with your writing? I'd love it if you left a comment. Thank you.

****My bit of news****
In case you haven't heard, this week I accepted and signed a contract with RUBY FICTION!
It's for three books and the first, 'Whispering Olive Trees', will be published in digital and audio in 2020. I can't tell you how pleased I am and it's still sinking in! On its website, Ruby Fiction says that its stories 'inspire emotions'. They are the ones I enjoy reading and I hope that mine will do the same for my readers next year.