Carol Lovekin talks about 'Snow Sisters'
This week, I am delighted to welcome Honno author, Carol Lovekin, back to the blog. She first appeared when she gave an interview here about her debut novel, Ghostbird, in March 2016. For me, Ghostbird was one of the best books I read last year - I loved it! - and I'm a huge fan of Carol's writing. Imagine how thrilled I was when she asked if I'd like to be part of her blog tour for her second novel, Snow Sisters. The tour has been running since publication day on September 21st and the book has been receiving amazing reviews. Rather than another interview similar to the one we had last year, I asked Carol if she'd like to write a guest post instead and here it is: 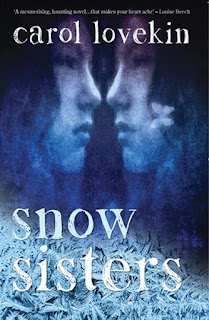 Second Book Syndrome & Ghost Writing
Received wisdom insists the second novel is the tricky one. Since Snow Sisters is the easiest book I’ve ever written I could be forgiven for arguing the point.

With the small success of my first novel Ghostbird, there was an expectation that a second book would at the very least be as good as its predecessor. Telling myself being published at all was sufficient unto itself, I imagined I was resisting the pressure. Right? Wrong! I’m a writer and one of the things being traditionally published did for me was confer a level of validation. It gave me permission to write; I was good enough and there was no reason not to write another book. Nevertheless, it was scary – I scared myself thinking about it – the difficult second novel.

After Ghostbird was released my publisher asked me what else I was working on. I told her, held my breath, concerned she might consider the subject matter too much like Ghostbird. Having been reassured that ‘in a similar vein’ was the way to go, I breathed out and scurried off to carrying on writing the story that was to become Snow Sisters.

But here’s the thing: technically, it wasn’t my second novel. Languishing in limbo was a story I affectionately referred to as ‘River’ book. I’d completed several messy drafts long before Ghostbird was accepted and before Snow Sisters was even a glimmer. The problem with it was, however much I liked the story – and I did – I’d never been convinced of its credibility. Writing it had been challenging and laborious. Text book second book syndrome, right? Right.

With Ghostbird accepted, I’d set River aside, assuming I would pick it up and continue wrestling with it once my writing life returned to normal. Meanwhile, the idea for Snow Sisters came unexpectedly and out of left field. Even before my publisher confirmed it, I sensed it could be the perfect follow-up to Ghostbird. River wasn’t a ghost story and Snow Sisters most definitely was. Janey, my friend and writing co-conspirator, read the outline and insisted it had muscle. To my surprise, I wrote it in record time.

And a small ghost-voice whispered, ‘Why are you so surprised? It’s your third…’
When people ask me if I believe in ghosts I tell them I believe in the possibility of them. The same way I believe in the possibility of magic – the kind found in the everyday, requiring little more than a suspension of disbelief to render my reader temporarily enchanted.
The truth is, I never set out to write ghost stories. When I began conjuring Ghostbird, my ghost was a vague shadow. She was little more than a device; a tenuous link between her twelfth century mythical origin and my contemporary setting. It was only when my mentor, Janet Thomas, insisted the ghost needed to be heard that I began to understand I might be writing an authentic ghost story. And so it proved – as I fleshed out the ghost’s voice I realised how much I was enjoying myself.

When it came to writing Snow Sisters, it was the ghost who came first – insistent and vocal. Angrier than little Dora in Ghostbird, and with an agenda, there was nothing tentative about Angharad’s voice. Woken by an act of kindness, her ghost dominated the narrative from the beginning and her story pretty much wrote itself.
As for River – what can I say? Already another ghost is nudging me – leaving her irresistible, half-voiced agenda in the outer reaches of my consciousness. She ‘keeps up her hauntings by day and night’* and I know who she is; I know what she wants. I know where she lives and who she’s going to haunt. And it’s nowhere near a river.

Two sisters, their grandmother’s old house and Angharad, the girl who cannot leave…
Verity and Meredith Pryce live with their fragile mother, Allegra in an old house overlooking the west Wales coast. Gull House is their haven. It also groans with the weight of its dark past. When Meredith discovers an old sewing box in a disused attic and a collection of handstitched red flannel hearts, she unwittingly wakes up the ghost of Angharad, a Victorian child-woman harbouring a horrific secret. As Angharad gradually reveals her story to Meredith, her more pragmatic sister remains sceptical until Verity sees the ghost for herself on the eve of an unseasonal April snowstorm. Forced by Allegra to abandon Gull House for London, Meredith struggles. Still haunted by Angharad and her unfinished story, hurt by what she sees as Verity’s acquiescence to their mother’s selfishness, Meredith drifts into a world of her own. And Verity isn’t sure she will be able to save her…

Thank you, Carol. I love the fact that, in Snow Sisters, it was the ghost of Angharad who  came first and that there's now another one already waiting in the wings for you in your 'River' book.

My Thoughts on Snow Sisters: 5 *****
Snow Sisters is a superbly crafted novel, written in figurative language that often borders on poetry.  I was captivated with the story from beginning to end. Throughout the book, stunning descriptive settings transport the reader straight into the world of sisters, Verity and Meredith. I loved the sound of Mared's blue garden, with its back story of the blue poppy; the snow-angel scene that takes place there is magical. Carol has created memorable, well-rounded female characters, exploring the relationship between sisters as well as between mothers and daughters. Allegra often exasperated me in her ineptitude as a mother and the effect her selfish decision to move to London had on Meredith, especially. The parallel stories of the present day and that of Angharad, the ghost of a previous inhabitant of Gull House who has a tragic secret, are woven together seamlessly, enabling the novel to flow. Written in the first person, Angharad's story reflects her class and the time in which she lived. This is storytelling at its best, delivered in beautiful prose, by a very talented writer. I highly recommend Snow Sisters and look forward to reading more of Carol's work.

Thank you for reading Carol's post. Do you believe in ghosts or, as Carol says, maybe in the possibility of them? Are you a writer, writing your second novel? I'd love it if you left a comment.