INTERVIEW WITH AUTHOR, CAROL LOVEKIN
Today, I’m thrilled to be chatting to author, Carol Lovekin. Carol’s début novel, ‘Ghostbird’, was published by Honno last Thursday, the 17th March, and I’m honoured to be part of her blog tour.

Carol, welcome. Please introduce yourself and tell us a little about your writing.
Hello, Jan. Thank you for inviting me onto your blog. It’s a pleasure to be here. I write contemporary fiction with an edge of magic. My stories are informed by the legends and the landscape of my home in West Wales. When I’m not writing, I’m a keen part-time swimmer and a committed flâneuse.

Can you tell us what inspired you to write ‘Ghostbird’?
The seeds of the story were sown years ago when I moved to Wales and read The Mabinogion. In particular, the strand dealing with the myth of Blodeuwedd, a woman conjured from flowers by powerful men for their political ends and ultimately cast aside and cursed. I was intrigued by the idea that to be turned into an owl was a curse, because to be a bird suggested freedom. I re-imagined the myth from Blodeuwedd’s point of view and it was only years later that she re-emerged and I decided I wanted to write a book with her reclaimed story at its heart. Cadi, the main protagonist, came as something of a surprise. To this day I’m still unsure why I chose a teenager. Maybe she chose me? Either way, one morning I woke up knowing who Cadi was: her name and her story and how it linked to Blodeuwedd’s.

Perhaps, you'd like to tell us how you got the book published.

The long, hard way - like most writers! I always wanted it to go to Honno, partly because of its reputation as an independent press publishing writing exclusively by women and because it always felt like the right fit for the story. Three and a half years ago I submitted the first fifty pages of Ghostbird' in one of Honno's 'Meet the Editor' events and was fortunate enough to be read by Janet Thomas. She asked to see the rest of the manuscript and we began a process which unfolded over the next few years. It was never a given that Honno would take it - I understood this from the start. Janet liked the story enough to continue mentoring me and because there was no expectation on either side, I did submit elsewhere - to agents and publishers who either rejected me outright or teased me with the proverbial, 'we love the way you write but...'
Meanwhile, Janet eventually felt the manuscript was ready to submit to Honno. A nail-biting time followed and I was seriously considering giving up and self-publishing when I got the offer. The rest as they say...

I have to tell you straightaway that I loved Ghostbird and couldn’t put it down.
And I have to tell you, I am charmed by your response! For someone who says she rarely reviews because she finds them hard to do, Jan, you have done me proud!

I was struck by the beautiful figurative language you used. I have to know, do you write poetry, too? 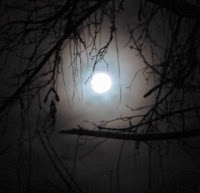 I like this question. I think the majority of prose writers are frustrated poets. So the answer is yes – I have a back-catalogue of quite dreadful poetry to my name! I’ve always read poetry – from Yeats and his Cloths of Heaven to Adrienne Rich and her glorious feminist poetry by way of Emily Dickinson, Dylan Thomas and Sylvia Plath. I love poetic, imaginative language, which is why I was drawn, in my early twenties, to Virginia Woolf and later to the American contemporary novelist, Alice Hoffman. Some might call that the sublime to the ridiculous, but for me, emblematic language attaches itself to your psyche and you never know where it’s going to come from or what form it will take. It can be complex or simple – what matters is that it has something to say that makes you hold your breath for a moment longer than you might otherwise do.

Your characters are very credible and you explore a whole range of human emotions through them. Can you say which came first, the characters or the story you wanted to tell?
Thank you. The story – definitely, then Cadi, fully formed and ready to lead me wherever we were meant to go. Once I had Cadi, her family followed. I struggled with Violet - Cadi’s mother - finding her unremittingly miserable, until I realised that was precisely why I had to learn to love her. Some of the characters - Pomona for instance – introduced themselves and one, I’m afraid, got unceremoniously ditched!

Are any of the characters based on people you know?
Writing a credible teenage character at my age was a challenge. I had to get inside her head and I did refer to two young women in particular to whom I am very close. I’m indebted to them for not minding that I ‘watched’ them - albeit mostly from afar - seeking out their idiosyncrasies and asking myself how they might respond to the different challenges Cadi has to deal with. None of my adult characters are based on anyone I know, although there is a line, spoken by one of them that a good friend will instantly recognise as shamelessly plagiarised from her! And another friend has a penchant for bare feet… I stole that too.

You evoke the smell of meadowsweet very effectively throughout the book and plants and nature play a prominent role in the story, Carol. Are you a gardener? If so, which plants have a special meaning for you?
Meadowsweet is, of course, one of the nine flowers the mythical Blodeuwedd is created from. In the past, yes, I have created several gardens. I have a particular fondness for ‘old’ flowers – the ones we associate with cottage gardens; the kind that might grow in a witch woman’s garden. Herbs too and medicinal plants generally. (I now live in a flat with no garden and tell myself I don’t miss all that weeding!) 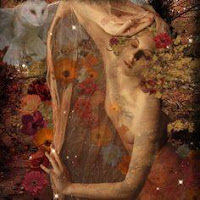 As well as nature, you’ve drawn on witchcraft and the tales of the Mabinogion to help you tell your story. How much research did you have to do?
Not as much as you might imagine. By the time I began writing the book I was very familiar with Blodeuwedd’s story and had my own re-imagined version down too. The witchy stuff has been a part of my life for more years than I care to recall; that was the easy bit! It was definitely finding Cadi’s voice that exercised me more than any other aspect of the story.

Before I’d even read a word of your novel, I knew it would be a book for me because of the wonderful cover design. Can you tell us about that and the title ‘Ghostbird’? 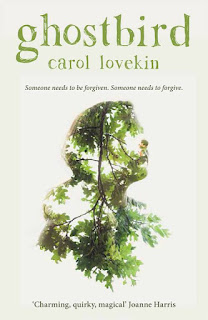 The cover is the icing on the cake. The original was black and white. It’s down to the designer and Caroline Oakley (Honno’s Publisher/Editor) that it was transformed to such exquisite effect.
The book wasn't always called 'Ghostbird'. The original title included the name of the ghost. It's old-fashioned and although it suits the character perfectly, it could, as the eagle-eyed Janet pointed out, evoke a sense of a straightforward Victorian ghost story rather than the more quirky offering that it is. I recalled that the old name for a barn owl is 'ghostbird'. In fact, it's the name in several cultures. I have a map in my home illustrated with images from The Mabinogion and Blodeuwedd is clearly depicted as a barn owl. The alternative title has proved a winner and once again, I have Janet's expertise and foresight to be grateful for.

On a more general note, do you have a particular writing routine?
Unlike an owl, I’m a lark and often write first thing, in bed, accompanied by tea and the cat. Once I’m up, I like to be in my study by ten o’clock and aim for a minimum of four hours on as many days as I can wrangle. I don’t beat myself up though – if I can write five days a week, I’m happy.

What is the biggest compliment a reader could pay you after reading ‘Ghostbird’? 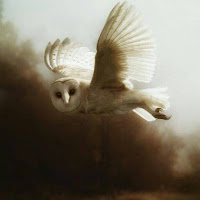 This is an unexpected and astute question. Thank you for asking it. I am touched beyond measure by each and every kind word I’ve been gifted but I guess it would have to be that they admire the quality of my writing. That’s what every writer wants to hear. We all seek validation and I am no exception; which is why securing a book deal with an influential press means such a lot to me.

What are you currently working on?
Another ghost story. It’s darker and a bit more complex but still rooted in Wales, in magic and mystery. This time has two young main protagonists: sisters. I can’t seem to get away from them.

You must have been very excited about securing the deal for ‘Ghostbird’. How did you celebrate?
After I picked myself up off the floor and stopped squealing down the telephone into my best friend’s ear, you mean? The following day, I had lunch with Janet, to celebrate getting a book deal instead of having the proposed chat about self-publishing! And I realised: I was ‘having lunch with my editor’ like a proper author!
The launch at Waterstones in Aberystwyth in a few days' time, will involve cake.

Thank you so much for taking time out of such a busy week to chat to me, Carol. I wish you good luck with your wonderful book.
It’s been a genuine pleasure, Jan. Thank you for having me and for asking such well-thought out, considered questions.

**A big thank you to Honno Press for sending me a copy of 'Ghostbird'.**

MY THOUGHTS AFTER READING ‘GHOSTBIRD’
This is a magical tale that kept me spellbound until the end. I was able to marvel at the figurative language and poetic nature of the prose without it detracting from the pace of the story. The characters are very well drawn, displaying deep emotions, and I was particularly fond of Cadi. Secrets unravelled and the reader journeyed with all the characters to a satisfying conclusion. I loved the interaction between Cadi and the ghost. ‘Ghostbird’ is a book I thoroughly enjoyed and I look forward to reading more novels written by Carol.

Thank you for reading. I hope you enjoyed hearing about Carol and her debut novel. I'd love to know your thoughts. Thanks! :-)

** If you leave a comment on my blog by midnight on Saturday 26th March, you will have the chance to win your own copy of 'Ghostbird' as your name will be entered into a draw.**

If you wish to read other interviews and reviews about 'Ghostbird' on the blog tour, here are the dates: 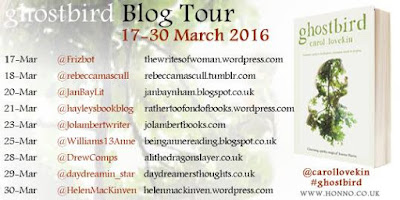